Apple Valley’s roots lead back to the mid-1800’s when it was a farming community known as Lebanon Township. The first settlers to the area were believed to have come from the east coast around 1855. 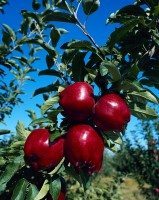 An Apple Tree in every Yard!

The Township began to transform in the mid-1950’s. Residential neighborhoods began to develop in the spring of 1955. In 1963, Orrin Thompson began building in the area. Thompson selected the name “Apple Valley” for several of his plats on either side of County Road 42 located in the southwest corner of the City. Thompson had an apple tree planted at each home in the some of the new developments.

Apple Valley is home to the Minnesota Zoo, a nationally-famous zoological garden which houses hundreds of animals from several distinct climatological zones.

A significant percentage of Apple Valley’s workers commute northward to the downtowns of Minneapolis and St. Paul, and closer-in suburbs like Eagan and Bloomington.  The METRO Red Line Bus Rapid Transit service connects you to residents, businesses, and the greater Metro area, including the Minneapolis-St. Paul International Airport.   Apple Valley boasts  vibrant retail-oriented downtown that is walkable, bikeable and well-connected. One of Apple Valley’s top employers is Uponor,

Thinking of living in Apple Valley, MN?  Here is helpful information about Moving to Apple Valley.